Are goals and aspirations the same thing? Mistake… 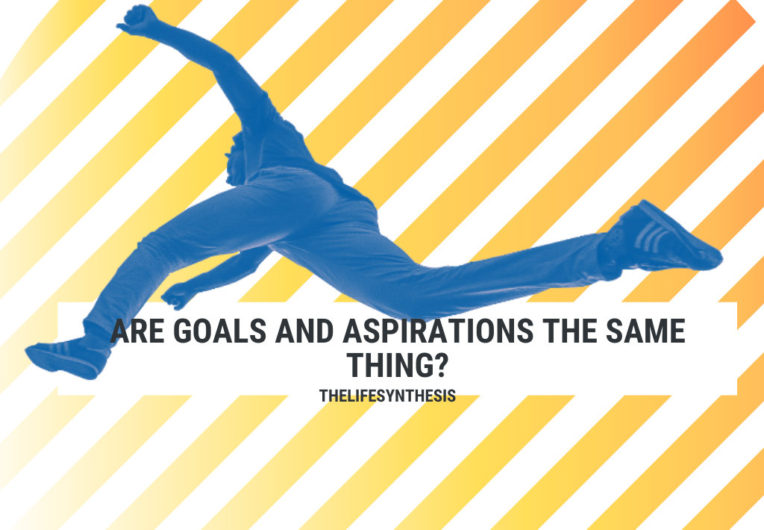 What came first: the goals or the aspirations? Are goals and aspirations birds of the same feather or are they far from flocking together?

Furthermore, are they the same thing, or are we missing out derely by neglecting one or the other?

I was wondering this recently when someone asked me this very question via email.

A goal is something I want, right? Yes.

Well a goal is also something I want.

Doesn’t that make them the same thing?

Then what’s the point of using them both? Isn’t that a waste of time?

But if there are subtle differences, neglecting to use one might be detrimental to getting the results we want.

Are goals and aspirations the same thing? No, they’re not – and yes, you do need both. An aspiration is a desire (ambition) for life to be a certain way. A goal is the pursuit of that ambition. A goal without aspiration is blind action, and aspirations without goals are nothing but wishful thinking.

A goal is a combination of an aspiration and an aim to fulfill that aspiration. Goals imply action, and they also imply the decision to transform the aspiration from imagination and feeling into concrete reality.

Whenever you set a goal, you are creating a way for you to accomplish the feeling you desire to have. In fact, there could be many goals that might lead to the same feeling.

This is actually a good thing, because the feelings that we desire are often not abandoned, but rather transformed into new goals for us to pursue.

This keeps us from getting bored, maintains the element of progress in our lives (essential) and gives us a sense of purpose in life – even if that purpose is only to do and be the way we choose to do and be.

In essence – a goal takes your desire (aspiration) to experience life a particular way, and provides a mechanism for doing so.

“Man, it would really be rad if I could [fill in the blank].”

Whatever is inside the blanks is an aspiration.

By the way, if you’re having trouble figuring out what your aspirations are, or what your goals should be, you can find out by taking this quiz.

So you might say that aspiration is a mix between the two – a desire to experience life in a particular way, and an inclination to (at some point) draw that experience into reality.

When the point comes that we decide to make our aspiration (dream) a reality, we set a goal, and formulate the plan of action that will do that.

Learn the simplest way for developing a plan of action right here.

What are the key differences between goals and aspirations?

A goal is a dream about to be realized through action and results. Aspirations are the dream itself.

In the same way that an aspiration could be considered an experience at a destination, the goal is the destination where the experience is had.

You might wish to travel through Europe as a goal, but the aspiration would be to see the world and experience freedom and adventure.

Another key difference between the two is that an aspiration requires nothing more than itself to exist.

A goal, on the other hand, requires a plan of action, objectives, a schedule and progress.

What happens if we skip one or the other?

An aspiration without a goal remains a dream forever. It never sees the light of day or breathes fresh air because there is no plan to take it from imagination land (our minds) into real life.

However, a goal without an aspiration can suffer from the following ailments.

The fact is, both aspiration and goal are essential parts of the goal setting process.

It’s possible to do them both in the same step, or do them naturally without thinking of them as individual steps, however, if the elements of both are not present in the proper order your attempt at accomplishing (whatever it might be) can go sour quickly.

How to use goals and aspirations in an action plan

Personally, I’ve always thought Indiana Jones was a badass. I love old stuff, I love ancient things, I love treasure, and I love wondering about what things were like in the past.

Indiana Jones’ is obviously not real, but my dream to travel the world, go on exciting digs of ancient sites and find buried treasure can be easily realized…and it will be.

Think of something you think is cool, and you’ve found your aspiration.

Convince yourself it’s possible, but not how you think. I’m not telling you to brainwash yourself, or to lie to yourself. I’m saying, through reasoning and logic, figure out whether your aspiration is possible.

If I were to sit here and think, “Is it possible that I could be like Indiana Jones?” a whole host of negative mental comments would spring forth into existence and convince me otherwise.

Instead of giving your mental chatter a voice, list out objectively what your aspiration would require, and then think whether or not a human in general could achieve that.

If we take my aspiration as the example:

The answer is definitely yes. People are literally doing that very thing right this minute.

Faith in ourselves is not required (even though it’s nice). The only thing we require at this point is whether it’s achievable in general.

Once you’ve figured out that it’s possible, set the intention to do it. Intent means you make a firm mental decision to do the thing.

Setting an intention means that, no matter the cost, time required or effort, you’ve made the decision to do this and it’s going to get done.

Now the time has come for you to set a goal. So in step one we had the aspiration, and finally now we have the goal coming to the fore.

The goal is the path you’ll take to achieve your aspiration, and a goal can be big or small. The only requirement is that the goal be effective at accomplishing the feeling and desire present within your initial aspiration.

If I’m trying to feel like I’m living my life like Indi, I would set a goal relative to that. I might start going to museums and get in the mood.

Goals can take all shapes and sizes, and the only requirement is that the feeling present within your aspiration is accomplished by the goal.

Couldn’t think of a step five. Four steps is sufficient.

Are goals and objectives the same? | Stupid Simple Answer

Are goals to be accomplished with a strategic plan?

How to Create a Master Plan that Ensures Success for your Goals and Projects!

I read a lot of books. I learn from a lot of experts. I learn stuff and package it all up for you.